Are strut camber bolts (crash bolts?) an allowed suspension modification in Street Classes. And if they are allowed are they safe on a heavy car? 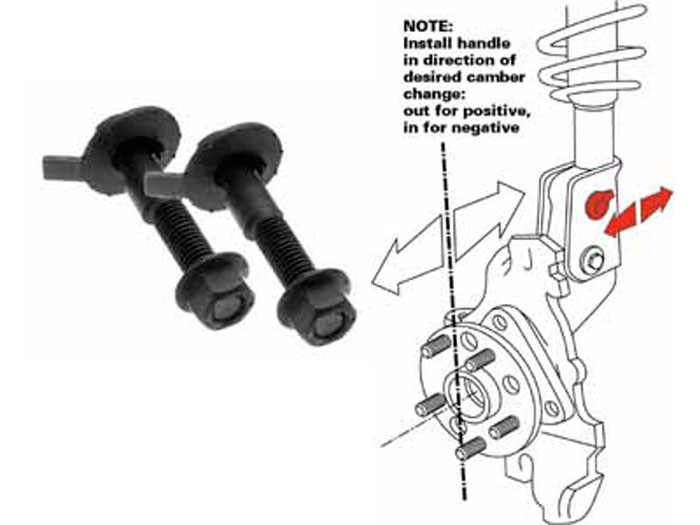 They are allowed on some cars.

I don't know if things are different for Street vs. the old Stock.

The Integra had crash bolts in a TSB... but the TSB specifically addressed fixing after an accident that involved a particular part. When I contacted Doug Gill, I was told you had to meet the requirements of the TSB applying to use the TSB... and then only for the side of the car effected.

So the TSB is a real crapshoot on applicability, and then only to be used to reach the pre-existing factory alignment (not greater than)

If you want something more than that... you need the Factory Manual listing Pete pointed out.
Top


E. If offered by the manufacturer for a particular model and year, the use of shims, special bolts, removal of material to enlarge mounting holes, and similar methods are allowed and the resulting alignment settings are permitted even if outside the normal specification or range of specifications recommended by the manufacturer. If enlarging mounting holes is specifically authorized but no material removal limits are specified, material removal is restricted to the amount necessary to achieve the maximum factory alignment specification.

Thank you all for your very helpful information.
I copied this post from a Mustang forum that appears to explain my option.

FYI Specific to autocrossers in the SCCA Street class: The Ford service manual specifies widening the upper of the two strut to spindle/knuckle/hub assembly bolt holes in the strut by 1 - 2 mm "as needed" in either direction (more or less camber). The manual also indicates that the service replacement bolts/nuts are smaller diameter which may also allow a little bit more adjustment range. This might result in 2 to 2.5 degs of negative camber for cars on stock springs. Torque is 184 lb-ft.
It appears from the online fordparts.com that the new bolts/nuts are 16 mm. The bolts and nuts come in packages of 4 at a pretty reasonable price. Note that on S197 Mustangs driven hard (autocross, etc.) if the pinch bolt loosens it is only a matter of time before the spindle/knuckle assembly breaks at the struct mount location. Generally with significant $$$$ collateral damage to other parts, even at autocross speeds. The bolts need to be tight! If reused they need blue Loctite thread locker. Check often.

There is no factory camber adjustment on my 2015 Mustang, front or rear. However if I am reading the rule correctly it appears that I can adjust the camber in my car by making the upper strut mounting hole a slot (enlarging mounting hole) and using 16mm pinch bolts. However as the poster above mentions there are safety (and $$$$) consequences should the pinch bolt loosen. If the rules allow camber adjustment by Mickey-Mousing the mounting holes wouldn't the better and safer option be a camber plate? Is there a way to seek a variance on a local level, that would allow the use of camber plates in this situation?
Typical human reaction to the accordion.. https://www.youtube.com/watch?v=UL6d4ZysqKo
Top

Yes, the 2015 Mustang service manual calls for physical grinding of the holes for alignment purposes. I've seen it discussed quite a bit on a 2015 Mustang thread in the RRAX forum. But you have to follow the allowance to the letter. Doing something different (illegal mod) because you don't like the factory method isn't an option. But I'd suggest you contact those folks who are seriously campaigning the car and have done the factory mod. Perhaps they can set your mind at ease as to the reliability of the mod.
Top

I don't see the slotting of the holes being an actual safety problem. If it were in any way, the manufacturer wouldn't recommend it (especially multi-scorned Ford), this just sounds like CYA talk.

Now undersized 'crash' bolts, in combo with our high G activity have been known to slip incessantly. But this is from R-comp experiance, might not be an issue with street tires. There is a case for these undersized bolts to losen up, and eventually fall out, creating an actual safety problem, but I believe any of us 'car guys' will feel the loose strut bolt WAY before it comes out. (says the guy who actually lost one on course).

Can anyone explain the background or reason for this rule. It allows camber modifications to be made on some cars but not others. And the method of modification seems less than ideal.
Typical human reaction to the accordion.. https://www.youtube.com/watch?v=UL6d4ZysqKo
Top

Can anyone explain the background or reason for this rule. It allows camber modifications to be made on some cars but not others. And the method of modification seems less than ideal.

I found some great information on this topic at this site:

Again thank you all for your assistance.
Typical human reaction to the accordion.. https://www.youtube.com/watch?v=UL6d4ZysqKo
Top

Here's the thread I assume will directly apply to your car. Do a thread search on it for "camber". I don't follow it closely, but I haven't heard of slippage complaints and some of these guys are top national drivers with ultra sticky tires. While they don't complain about slippage, there do seem to be issues with breaking the original bolts loose, and something about the new bolts not being available so they're grinding splines off the old ones -- or something. I wasn't really paying attention.

We have different definitions of "great information".
Dr. Conemangler
aka The Malefic One
2015 Wildcat Honda F600
Top

You're right Dr. Conemangler, a very poor choice of words.

It seems likely that the only reason a manufacturer would include such crude methods of camber adjustment in their Service Manual is to help their dealers adjust the alignment on a customers car after an accident or curb whacking. You can be sure it isn't there to help owners to turn their cars into race vehicles. Can you imagine the legal implications? I believe the method described in the Ford Manual is for passenger cars driven only on public streets.
Typical human reaction to the accordion.. https://www.youtube.com/watch?v=UL6d4ZysqKo
Top
Post Reply
14 posts • Page 1 of 1